skip to main | skip to sidebar

Three-fifths of a man?

From the beginning a black man was considered three-fifths of a man (as spelled out in Article 1, Section 2 of the U.S. Constitution).
Posted by David Ben-Ariel at 8:57 AM No comments:

She's not so "honored" by the president usurper, the fraud and foreigner,﻿ since Obama/Soetoro/Obama abandoned her to welfare. Dishonesty apparently runs deep in that criminal family.
Posted by David Ben-Ariel at 12:15 PM No comments:

"Liberty cannot be preserved without a general knowledge among the people, who have...a right, an indisputable, unalienable, indefeasible, divine right to that most dreaded and envied kind of knowledge, I mean the characters and conduct of their rulers."
-- John Adams
(1735-1826) Founding Father, 2nd US President
http://quotes.liberty-tree.ca/quote_blog/John.Adams.Quote.9C15 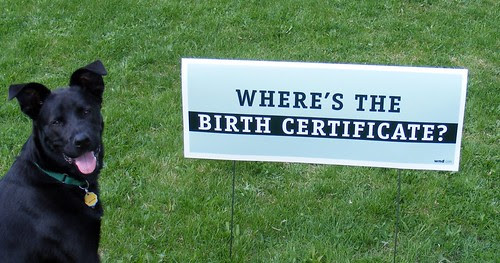 The President usurper, the fraud and foreigner, the bastard from Africa, the con man from Kenya, reveals his shady character by refusing to be transparent with many important documents from his educational records to long form birth certificate. Emperor Obama must go!
Posted by David Ben-Ariel at 3:25 PM No comments:

Regardless of how often Obama's puppets attempt to play the American people for fools, repeating the big lie that Barack Hussein Obama's aides posted his birth certificate, a COLB is not a long form birth certificate! Such efforts to mislead have been exposed.

“In response to a direct question from WND, the Hawaii Department of Health refused to authenticate either of the two versions of President Obama’s short-form Certificate of Live Birth, or COLB, posted online – neither the image produced by the Obama campaign nor the images released by FactCheck.org" (Hawaii refuses to verify president's online COLBs).

Which hospital was Obama supposedly born in? Not a single hospital in Hawaii claims him as their own! Which doctor supposedly delivered him? These legitimate questions remain. When will responsible media address them? Obama has yet to come clean about his birth certificate. The president usurper must be called to an accounting!
Posted by David Ben-Ariel at 7:04 AM No comments:

The Case against Obama

Read the whole entry »
Posted by David Ben-Ariel at 6:11 AM No comments:

EXCLUSIVE: Sheriff’s Challenge to Obama: Give Me Half Hour, I’ll Show You How to Secure Border
(CNSNews.com) - Sheriff Paul Babeu of Pinal County, Ariz., says if President Obama would simply spend a half hour with Babeu in Arizona, Babeu will convince the president he can successfully secure the border and thus make himself a hero who transcends partisan politics.

The president usurper, the fraud and foreigner, isn't interested in anything FOR the United States, since his indoctrination against America for over 20 years at Jeremiah Wright's haven of hatred has poisoned him. Furthermore, how can Obama/Soetoro/Obama speak against illegal aliens when he has still failed to prove he's a natural born citizen and refuses to show his long form birth certificate?
Posted by David Ben-Ariel at 7:16 AM No comments:

Americans left in the dark

The vast majority of Americans do not know who he is, but someone surely does. Someone paid for his travel expenses to Pakistan and Indonesia. Someone engineered legal challenges to all of  his election opponents for the State Senate and had them disqualified. Someone straightened and leveled his path to the U.S. Senate when a Democrat Judge made public the child custody records of his Republican opponent. When he was a candidate for the U.S. Senate, someone arranged for him to speak at the 2004 Democratic National Convention. Someone saw to it that all of his records were sealed, both at home and abroad. Someone assembled the massive organization for his run for the Presidency. Someone knows all about him.
Who?
- Savior or Saboteur? Obama in a Realistic Light
Posted by David Ben-Ariel at 5:02 AM No comments:

I'm not a terrorist

Born Again: The Kingdom of God!

An Alternative to the UN